As part of a team of IBM Redbook Thought Leaders, I blog for the IBM Social Business Insights blog, and repost those blog posts here on my personal blog. Cool or creepy, part 2: Seven additional social networking apps to consider, is the second part of a series that was originally published on December 23, 2013, and is owned by IBM. Part 1, Five new social networking applications: Cool or creepy? is here.
I recommend checking out the IBM Social Business Insights blog for some compelling and though-provoking content.

This holiday season it’s time to tech the halls with boughs of privacy…or maybe not?

During the holidays, many people share gift ideas, wish lists, New Year’s resolutions they have no intention of keeping and a good amount of laughter with family, friends and loved ones.

Last year we took a look at some popular social networking applications that were designed to connect people by sharing only the information the user wanted to share. With thousands of apps being created every day, and as we close out another tech-obsessed year, which apps will stick around in 2014? Let’s look at some recent apps and ask the same question: Are these cool or creepy? 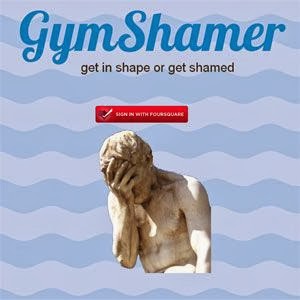 Gym Shamer is an app that lets you set your workout goals and then check in at the gym through Foursquare. If you miss a workout, the app tells your entire social graph that you blew it.

Cool/creepy factor: This one definitely falls on the creepy side. We’re good enough at the remorse game ourselves for missing a workout, especially if we list “Get in Shape” as one of our New Year’s resolutions. We don’t need all of our friends, family, colleagues and followers piling on the grief.

Butt Analyzer is, yes, you read it correctly, an app that uses your phone's camera to take a photo of a man’s or woman’s derriere and calculate the attractiveness of that booty on a scale of 1 to 10. It’s only available on Android, so we couldn’t test it out (which is probably just as well), and there’s a share button that enables sharing the results with your social network.

Cool/creepy factor: This app is one of the highest ranking out there on the creepy scale.

Spout is a new way to look at your social content feeds—Twitter, Facebook, Instagram and Flickr—in a swirling, moving, graphically interesting format where the words flow and stream across the screen. You can set the theme, mode, display time, animation style and word speed.

Cool/creepy factor: Definitely cool. Spout is a word lover’s dream. It would make an amazing screensaver. Hint: if the word stream makes you dizzy, try different speeds and animation styles to find the one you like best.

The webpage for CARROT for iPhone touts it as “the to-do list with a personality.” You create your to-do list, and CARROT berates you for failing to complete items and rewards you when you finish them. “She” has 400 rewards for good behavior at her disposal, but states, "You don't want to make me upset." Personalized gamification, anyone?

Cool/creepy factor: We’re leaning toward cool for this app, as this reviewer could use some help getting her to-do lists completed. But, getting scolded by her smartphone could also result in immediate app deletion. Not sure what an angry Siri sounds like, but do you want to find out?

Talk about a well-defined target audience: no smartphone, no Facebook profile, no Tinder dating. If you read the online reviews (which we did) it would appear that Tinder is taking the millennial dating world by storm. Its claim to fame? It finds out who is nearby and connects you with them if you're mutually interested. A photo of someone in your pre-defined geolocation pops up on your phone, and you swipe left if you’re interested, right if you’re not. Or maybe it was right if you’re interested, left if you’re not. Anyway, if the other person also swipes in the yes direction, a chat box pops up and you can chat. After that, it’s up to you.

Cool/creepy factor: This app is cool if you live in a large metropolis and have trouble getting out and meeting people. All millennials have active Facebook pages and smartphones, right?

This app sounds like just what it does. Slydial is a voice messaging service that connects you directly to someone’s mobile voicemail, bypassing the ringing. How many times have you dreaded dialing a number and praying the other party on the end of the line doesn’t answer and your call goes straight to voicemail? Now, there’s an app for that.

Cool/creepy factor: This app is actually pretty cool. Users click on the slydial icon and instantly connect with the recipient’s voicemail box. Slydial can be used for practical and efficient communications when you’re short on time, when you’d rather not leave a text and, more important, when you want to avoid life’s awkward moments. This app is currently only available in the US.

“Take control of your health and well-being—anytime, anywhere!” is the tag line for this app. The MedXCom Patient app is a patient portal that lets you store and manage all of your health profile with confidence and convenience and instantly share important data and updates with your doctors.

Cool/creepy factor: MedXCom is both cool and creepy. It is a great way for people to manage health information and include as many details as they need to monitor personal health like reminders for taking medication, storing images of health insurance cards (most people lose these cards every year) and the ability to instantly notify health professionals in case of an emergency. However, on the creepy side a feature of the app is called “safe bumping" that encourages dating singles to go to the doctor for regular STD checks. And yes - that information can be shared.  We'll stop there, but it's safe to say we think it's TMI and bit too creepy.

It would seem that the term privacy means different things to different people in the digital age with our evolving interconnectedness. However, two key constants remain with the emergence of social networking apps: user discretion and transparency. Perhaps we can make 2014 the year privacy found its way back from the abyss of mobile applications. That’s one resolution we can all stick to…maybe.