In June this year, I accepted the volunteer Chapter Director position for the Silicon Valley chapter of One Brick, a nonprofit that I've been deeply involved in since 2009. It's more work than I anticipated, but it's rewarding to be making a difference.

As an event manager and member of our social media team, I've always been aware of the annual campaign, take advantage of IBM's automatic payroll deduction plan to donate throughout the year, and donate online when the annual campaign kicks off on Giving Tuesday. 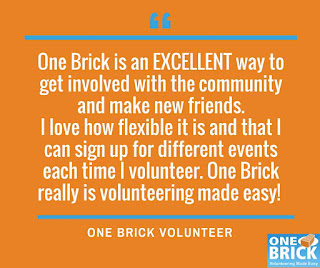 As a chapter director, I found myself immersed in the fundraising process: writing and sending fundraising emails to my chapter members, creating social media tiles and a small video, and taking responsibility for meeting the donation goal for my chapter of the organization.

In the midst of this end-of-year flurry of activity, I noticed that my personal email filled with donation requests which made me curious about end-of-the-year charitable giving. Not surprisingly, I turned to Charity Navigator, the "nation's largest and most-utilized evaluator of charities" to satisfy my curiosity. All of those fundraising letters obviously pay off: 31% of all giving occurred in December and 12% of that in the final three days of the year.

Now that I'd answered that question, I found a few more interesting giving facts from Charity Navigator including:
Have you made a donation to your favorite nonprofit yet? Did you know that even small amounts —$10 or $20 — make a difference? Don't delay — you only have a few more days to take advantage of the 2015 tax deduction. Happy Giving.